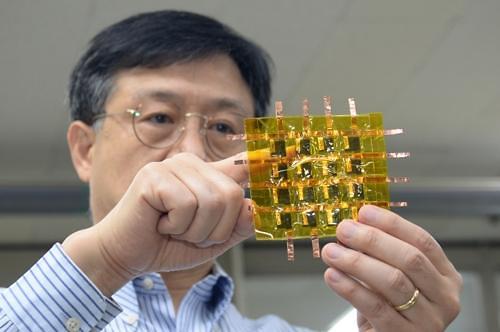 [Courtesy of the Electronics and Telecommunications Research Institute]

The Electronics and Telecommunications Research Institute (ETRI) said in a statement on Thursday that its researchers have created Ecoflex, a highly sensitive flexible strain-pressure sensor using a graphene hybrid nanostructure foam.

Sensors for prosthetics are widely used in the medical industry to record and analyze the rehabilitation progress of patients. Because of their rigidity, conventional sensors are used in limited places.

Ecoflex is about ten times more sensitive than conventional sensors and it is durable enough to be bent over 4,000 times, the state institute said, adding commercialization is possible in two or three years.

The institute said that researchers have also developed a module and motion sensor which can detect movements in finger joints, eyelids and the neck. "Ecoflex can be attached to the human body to monitor a person's movement, posture, blood pressure and heartbeat rate in real time," an ETRI researcher was quoted as saying.