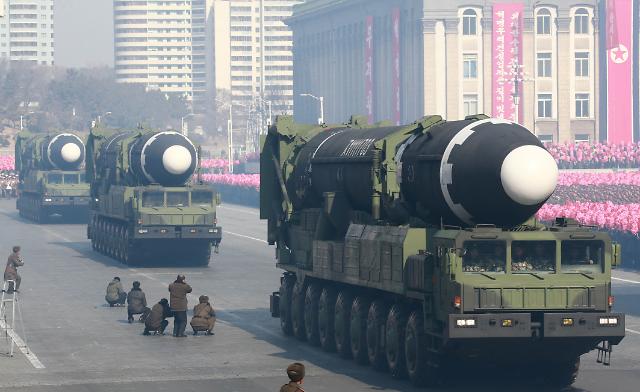 
SEOUL -- Work on dismantling key facilities at a North Korean base for intercontinental ballistic missiles and engine testing appeared to have slowed down with no signification activity monitored this month, according to 38 North, the website of a U.S. research institute.

In its analysis in July, 38 North detected significant progress in tearing down facilities in the North's Sohae space center, including a rail-mounted processing building used to assemble space launch vehicles and the nearby rocket engine test stand that played an important role in the development of ICBM technologies.

U.S. and South Korean officials saw the dismantlement of facilities in Sohae as a good sign in efforts to achieve denuclearization.

Fresh satellite imagery from August 16 showed no significant dismantlement activity has taken place at either the engine test stand or the launch pad since August 3, according to 38 North. "The components previously removed remain stacked on the ground," it said.

On the launch pad, work on the rail-mounted transfer and processing building appears to have stalled and the same parts of the west and north walls that had been previously removed remain stacked on the ground, 38 North said. "The gantry tower and assembly building are intact. It is still unclear if this activity is associated with dismantling or modification of the structure."

North Korean leader Kim Jong-un announced a decision in April to suspend missile and nuclear tests in a peace offensive that led to summits with South Korean and U.S. leaders. However, there has been a dispute between U.S. and North Korean officials over how to achieve denuclearization. Washington wants quick and tangible steps while Pyongyang insists on a gradual and synchronous approach.

The North's long-range ballistic missiles capable of carrying nuclear warheads have been a prime security concern in Seoul and Washington.