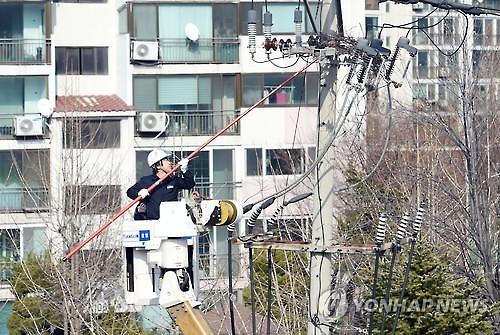 A state power company employee is trying to pull down a magpie nest from a power pole. [Yonhap Photo]

​
SEOUL -- For centuries, a blue-black Oriental magpie has been regarded as a sign of good omen, living together with villagers across the Korean peninsula who believed a welcome guest would come when the crow-like bird, known as "Kkachi" in Korean, sings.

Kkachi has been used by many Korean organizations as their symbols until the late 1990s. However, a public perception has changed dramatically to designate it as a detrimental bird for inflicting serious damage to fruit trees, crops and electric facilities.

"Although magpies are still considered as a good omen, they are a nightmare to farmers and electric company officials because they inflict serious damage to crops and power facilities," an environmental ministry official told Aju News, calling for strong control on the population of the birds.

Government data showed about 220,000 magpies have been killed every year by professional bounty hunters. Rewards are offered by local governments or power companies because they also cause blackouts by building nests on power poles and transmission towers with sturdy conductive materials such as broken iron hangers, bent spoons and wires.

According to the Korea Electric Power Corporation (KEPCO), up to 30 blackouts have been caused by magpies annually. Currently, the state utility company operates a total of 552 hunters as special exterminators who have slaughtered some 2.1 million magpies from 2008 to 2017 for 8.7 billion won ($7.7 million).

Efforts to reduce the magpie population have largely been fruitless. "Every year, the number of hunted magpies brought into regional government offices is increasing," the ministry official said. "It's mainly because natural enemies like hawks and falcons are scarce around them."
The nest infestation of magpies reaches its height at their breeding season in March and April. Last year, KEPCO officials destroyed about 13,000 nests, but the smart birds can build new nests quickly.

In a recent pilot project, KEPCO adopted bird-friendly covers for co-existence to prevent short-circuiting. The covers made of non-conductive materials prevent magpie nests from directly touching power lines, but such covers were found to be useless.

"We are looking everywhere to reduce blackouts caused by birds, but it's not so easy," a KEPCO official said.