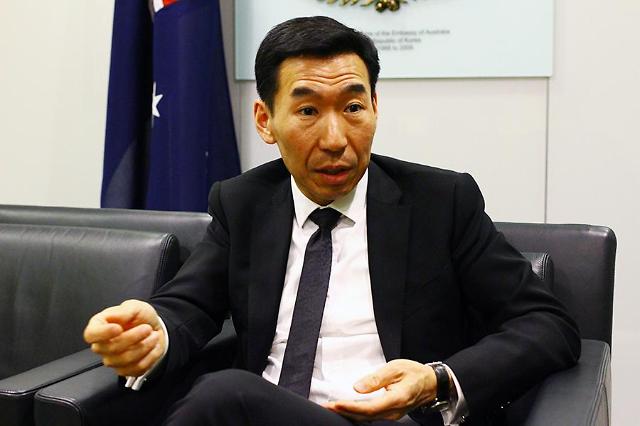 
SEOUL --  Amid growing international concerns about a possible trade war between the United States and China, Australia is ready to take a leading role in advocating free trade and resisting protectionism, its top envoy in Seoul said.

"It's a great big concern for Australia," Australian Ambassador to South Korea James Choi said in an interview with Aju News, calling for cooperation between Australia and South Korea, which depend on free trade.

Protectionism will backfire because protectionist measures and raising tariffs only harm the countries that implement them, he said.

Australia supports the Comprehensive and Progressive Agreement for Trans-Pacific Partnership (CPTPP), also known as TPP11, that would eventually involve the United States, he said. "Our hope is that this protective sentiment in the United States especially is a temporary phenomenon."

"In the end, agreements such as CPTPP will get actual buying from the United States in the future."

In the early 1980s, Australia was a very protective country with high tariff walls, but reforms have since been carried out to free up the economy through reduced tariffs, enhanced competition between foreign and domestic firms, deregulation in the labor market and increased flexibility.

As a result, Australia has become a very flexible economy backed by one of the most competitive and well regulated financial sectors in the world, Choi said, adding competition and free market principles have accelerated economic growth for 27 years in a row. "Flexibility is the key to our growing economy."

China is Australia's largest trading partner with some 30 percent of Australian exports going to China. The United States is the fourth largest export market but it is the largest investor in Australia.

"Every civil action" in South Korea is affected by some type of regulation and that stifles innovation and stops companies from doing things that can create new ways of doing business, he said.

Meanwhile, Australia puts strong principles in place to bust an old practice of extending loans to those who don't deserve or can't afford to repay, he said, adding Australia has a strong regulatory culture that allows innovation but precludes certain bad practices.

"I think the most fundamental issue ... is having competition in innovation while at the same time having a regulatory environment which stops bad practices. Getting that balance right is the key."

Australia and South Korea benefited from a free trade agreement (FTA), which put Australia on a "level playing" field with major competitors like the United States and Chile, especially in agriculture and resources. "We are now on a level playing field. So Australia is very keen as a very good competitor in these areas," Choi said.

The free trade accord has reduced tariffs in areas like beef, food, wine and liquefied natural gas, and prominent Korean brands gained huge brand recognition in Australia, the envoy said. For example, he said Hyundai regards Australia as a lucrative market because it is the largest seller of small and mid-sized cars, which are in price competition with Japan's Toyota.

Calling Australia an easy place to do business, Choi urged small and mid-sized companies from South Korea to find business opportunities by pursuing a strategy that caters to the market.

In resources, the two countries have established a long-standing partnership since Australia helped Posco, a steel giant which led South Korea's industrial leap, to secure technology needed to establish its first steel mill in the southeastern port city of Pohang five decades ago.

Major Australian resources companies such as BHP and Rio Tinto are still doing well in South Korea through long-term contracts with Posco, Hyundai Steel and other partners, but the two countries now face a different structure in their trade, Choi said.

Now financial services and infrastructure companies like Macquarie, a global investment banking and diversified financial services group, move into renewables and niche markets while Australian lawyers, accountants and asset managers are establishing their presence in South Korea, he said.

As the sixth largest pool of managed funds in the world, Australia has significant expertise in financial management, and South Korea is emerging as a global manager chasing yield and diversifying investments, Choi said. "So, it's in the financial services for strategic partnerships we could develop for the future."

"To a global perspective, Australia has significant capabilities especially in areas such as infrastructure," Choi said.

Other than trade, which focused on agricultural products and mineral resources, the envoy suggested the two countries should promote security and strategic cooperation.

Apart from the United States, Australia is the only country which maintains "two plus two dialogue" with South Korea between foreign and defense ministers. "We are both allies with the United States, but at the same time, we have China as our trade partner and we are both looking at diversifying our relationship in the Indo-Pacific region," Choi said.

In its foreign policy "White Paper", Australia defined South Korea as "one of the top priority countries in our immediate region", the envoy said. "So we are very keen to enhance and upgrade our relation."

He urged South Koreans to forget "misconception" brought by Australia's old policy, which was abolished in the 1960s, saying Australia is now "a very egalitarian" society" and provides opportunities to everyone who wants to contribute.

Australia has built a culture of accepting migrants, giving them opportunities and integrating them into a society, with its education system allowing everybody to have free and equal access and develop skills, he said, adding that because of its migration policies and a very good fertility rate, Australia's population would grow from 24 million right now to 40 million by 2060.

(This interview was arranged and contributed by Aju Business Daily writer Park Sae-jin.)