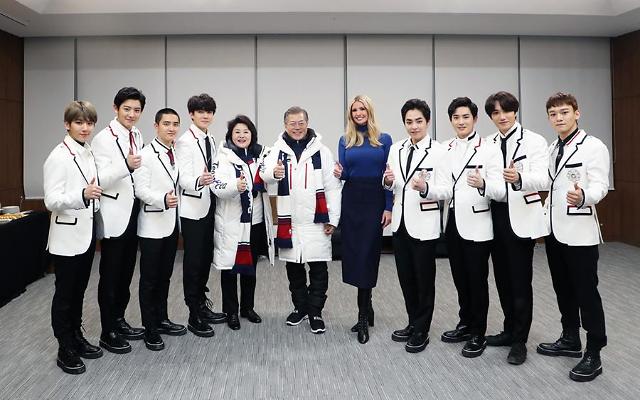 
SEOUL, Feb. 26 (Aju News) -- Ivanka, the daughter of U.S. President Donald Trump, returned home with a happy memory about her trip to South Korea and a gift box from K-pop idol EXO for her children.

Before boarding a plane back to the United States Monday, Ivanka told reporters, "It was a wonderful first visit and just exciting and beautiful."  Of course, her suitcase contained EXO's gifts including albums, aromatic candles and souvenir photos for her kinds.

During her four-day trip in South Korea, Ivanka has expressed her interest in K-pop, saying at a dinner last Friday with President Moon Jae-in that her three children were dancing to K-pop music every day.

Her "incredible" moment came on Sunday night when Moon invited EXO members and CL, a former 2NE1 member, to a surprise private meeting with Ivanka, after they performed at the closing ceremony of the Winter Olympics in the eastern ski resort of Pyeongchang. The meeting took place in a reception room, attended by Ivanka, Moon and First Lady Kim Jung-sook. 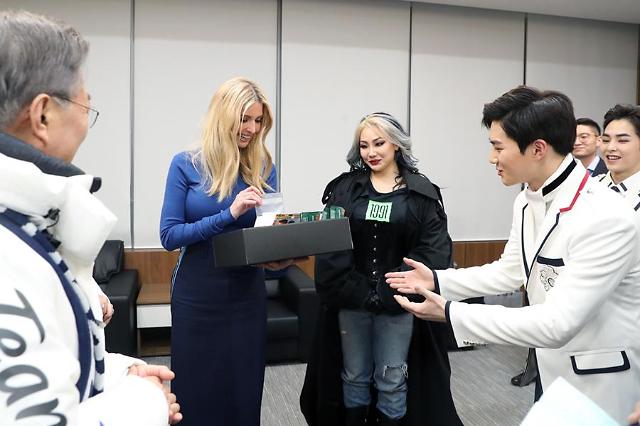 
"Incredible," Ivanka said, expressing joy and wonder upon her close-up encounter with EXO and CL, according to the president's office. Ivanka was quoted as telling EXO that her children are big fans.

EXO members presented Ivanka with gifts for her kids and promised to invite them to the group's U.S. concert in the future. Ivanka gladly asked when the concert would take place.