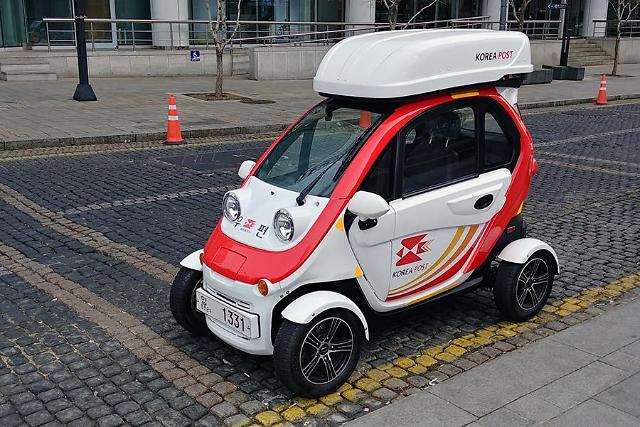 
SEOUL, Feb. 20 (Aju News) -- In a state program aimed at reducing air pollution and improving the work quality of deliverymen, compact electric vehicles made their debut for a test run in Seoul to replace gasoline-fueled motorcycles.

The Ministry of Science and Technology said in a statement that it would gradually replace some 10,000 postal delivery motorcycles with compact electric vehicles (EVs) by 2020. Dozens of compact EVs were showcased in the streets of Seoul on Monday and the ministry will use three types of EVs for test-runs by postmen in March.

An electric cycle type, a tricycle type and a single-seated four-wheeler type will be provided to match the working environments of postal workers.

The heavy workload of postmen has long been a social issue. South Korean postmen work more than ten hours a day on average, according to the state-run Korea Labor Institute. City mail deliverymen normally travel about 40 kilometers (24.8 miles) a day, while those in rural towns and remote areas move around more than 100km.

"We are very excited about the replacement program. We hope the EVs will improve our work quality," a postman who participated in Monday's event near his head office in central Seoul told Aju News. The EVs capable of carrying up to 100 kilograms (220 pounds) will help reduce the number of runs to parcel depots, while a motorcycle carries about 35kg per run.

Meanwhile, the Ministry of Environment plans to shift the paradigm in South Korea's delivery industry backed by about 200,000 delivery workers who are heavily dependent on motorcycles. The ministry hopes to replace about 50,000 outdated motorcycles by 2022 by edifying public companies and food franchises on clean energy.