Moon compromises nuclear policy but no mention on spent fuel 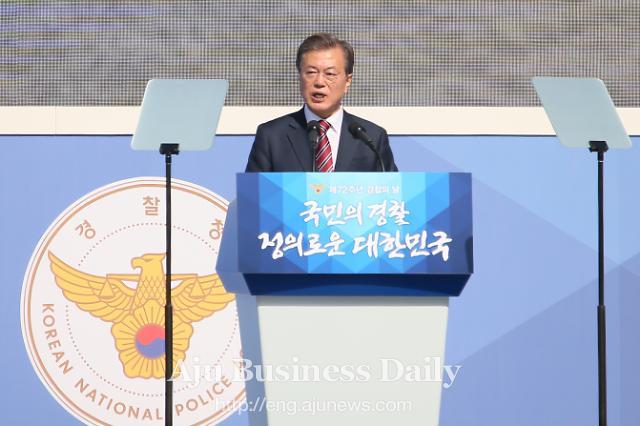 
President Moon Jae-in accepted public recommendations for the resumption of work on two unfished reactors while sticking to his "nuclear-exit" policy of phasing out nuclear power plants and replace them with natural gas and renewable energy.

Construction near the southeastern port city of Busan would resume soon because Moon agreed to respect recommendations made by an independent state commission. "As the government has already declared, it will push for an energy conversion policy without any hitch," Moon said in a written statement issued on Sunday.

In a final survey of 471 people selected by the commission, 59.5 percent supported the construction of the reactors near Busan while 40.5 percent opposed it. With two more reactors, the country's largest nuclear power complex in Gori and nearby areas would have 15 reactors.

In his message seen as a compromise, Moon agreed to "actively" support exports of home-made reactors, but he did not answer the commission's sensitive recommendation that South Korea should work out a quick solution to spent fuel.

Moon said during a pre-election TV debate that Seoul should open re-negotiations with Washington on revising a 2015 accord that has effectively restricted the development of reprocessing facilities to acquire enriched uranium as fuel.

South Korea had wanted to develop uranium enrichment and reprocessing capabilities in order to address concerns about energy security and the management of spent nuclear reactor fuel, but Washington insisted such capabilities could be used to produce weapons-grade nuclear material. South Korea has been on watch by the nonproliferation community because of its covert nuclear program in the 1970s.

The 2015 deal only allowed South Korea to conduct research into "pyroprocessing", a new unverified technology considered largely proliferation-resistant since the product is thermally and radioactively far too hot to use for a weapon.

Wary of potential proliferation, Washington has insisted that wider concessions on reprocessing could complicate efforts to denuclearize the Korean peninsula. However, the North's aggressive nuclear and missile tests have changed a public perception, and many South Koreans now support reprocessing and nuclear-powered vessels.

Piles of spent fuel rods stacked at more than 20 nuclear reactors have been a stringent issue in South Korea. If South Korea ever decides to scrap the 2015 accord, it would be able to produce a huge amount of nuclear material, probably faster than North Korea.