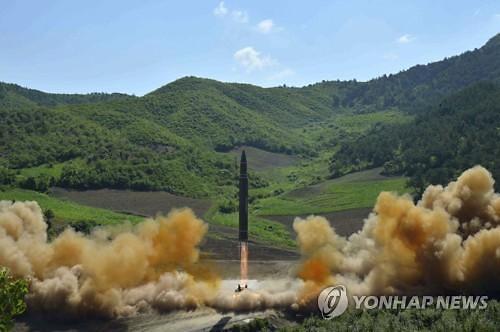 
South Korea accused North Korea of reaching a critical point of the so-called "red line" with the second test launch of an intercontinental ballistic missile, saying it could change its strategic patience to adopt military pressure.

Prime Minister Lee Nak-yon said that the North's long-range missile test at the weekend has brought a "fundamental change" to the security situation on the Korean peninsula. "With its July 28 ICBM launch, North Korea has reached a critical point of the red line," he told reporters.

Pyongyang is missing a chance for rapprochement, Lee said, adding Seoul may have to give up its peace initiative. South Korean Defense Minister Song Young-moo
said at a parliamentary defense committee that Seoul went ahead with the temporary deployment of additional THAAD launchers because North Korea was crossing the "red line".

The North claimed that through the test of its Hwasong-14 missile, Pyongyang demonstrated its ability to make a surprise ICBM launch "in any place and location any time" and to put the entire US mainland in the range of its missiles.

Song, however, cast doubt over North Korea's claim it has mastered technology to produce a nuclear warhead small enough to be mounted on a ballistic missile. "It's too early to say the launch was made to test its atmospheric re-entry capability."

John Schilling, a US expert, said in an earlier article published by 38 North, the website of a US research institute, that it would take a decade or more at best to produce an ICBM capable of carrying multiple nuclear warheads. The Hwasong-14 is an "unreliable" missile that can reach Alaska or Hawaii with a single nuclear warhead, he said.