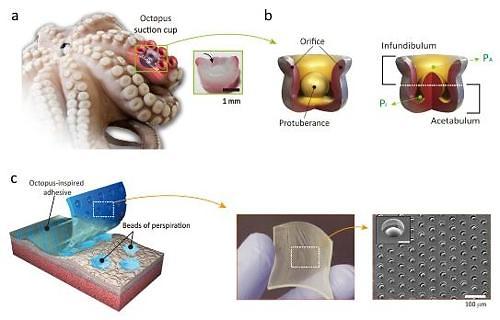 
South Korean scientists claimed to have developed a powerful wet-tolerant adhesive patch inspired by Octopus suction cups that can be attached and detached up to 1,000 times. They think the patch can be used for medical adhesives, wearable devices and industrial materials because it sticks to wet or dry surfaces, leaving no residues.

The adhesive patch has tiny porous structures spread across its surface which imitate Octopus suction cups, a research team from Sungkyunkwan University in Seoul, led by professor Pang Chang-hyun, said in a paper published in Nature, an international science journal.

The sticky patch uses a simple solution of trapping air which involves fabricating a patterned structure with micrometer-scale suction domes, the paper said.

The team created a prototype patch, 3 centimeters by 3 centimeters, and found out through a series of tests that the adhesive patch maintained strong suction regardless of how wet or dry the surface it stuck on. In an underwater condition, the patch held onto a glass surface with three newtons per square centimeter, according to the paper.