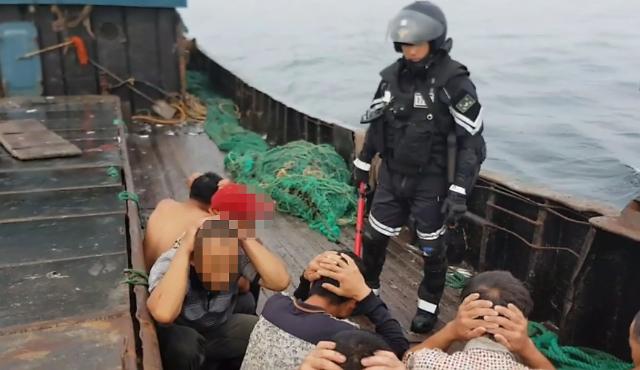 A file picture on a coastguard crackdown on illegal Chinese fishermen.[Yonhap News Photo]


Three Chinese fishermen were dead and 14 others were rescued unhurt by a coastguard vessel Thursday when their boat caught fire while being chased for alleged illegal fishing off South Korea's southwestern island.

Coastguard authorities said the 120-ton drift-net fishing boat was engulfed in a sudden and unknown blaze during its run to avoid an inspection in waters 70 kilometers (42 miles) southwest of Hong-do (island).

The coastguard said the ill-fated boat was within South Korea's exclusive economic zone (EEZ) at 9:45 am (0045 GMT) when coastguard officers stopped it and brought the blaze under control.

Three fishermen found unconscious in the engine room were transferred to the coastguard ship for cardiopulmonary resuscitation, but they were pronounced dead later.

China has tried to urge its fishermen to stop illegal fishing in waters of neighboring countries, but they continue to poach as fish stocks at home are depleted. Illegal operations by Chinese fishermen have caused diplomatic and security concerns along the Yellow Sea border between the two Koreas.