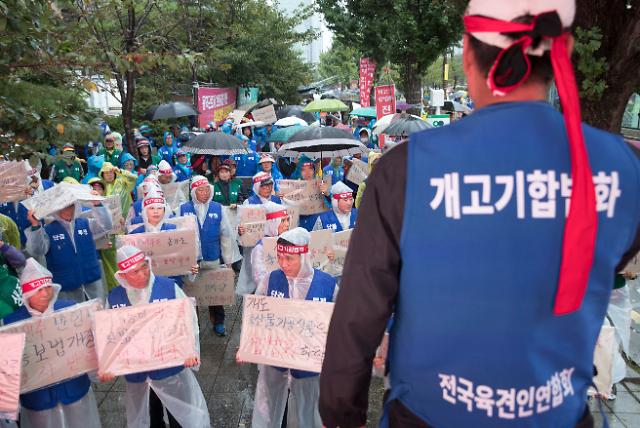 
More than one thousand farmers breeding edible dogs braved a driving rain to hold a rare rally Wednesday in protest at a parliamentary move to revise an animal protection law that would virtually restrict controversial dog butchering in South Korea.

The farmers wearing raincoats and red headbands carrying a slogan reading "Legalize dog meat!" marched near the parliamentary hall in western Seoul and urged legislators not to endorse a revised law proposed by the main opposition Minjoo Party of Korea.

"The Minjoo party is proposing amendments without checking facts only to win public support. It is threatening the livelihood of 15,000 dog breeders," their statement said.

The initiative has been widely supported since Pyo Chang-won, a Minjoo party member, called for tight restrictions to protect animals.

-- Do not hang an animal to butcher it.
-- Do not use any tools, heat or electricity to wound an animal.
-- Animals should not be placed in confined space for a long time.
-- Animal farms should get a state license to prevent abuse.

Eating dogs has settled as a Korean tradition for ages, but  the population of eating dog meat called Boshintang (dog soup) has dropped dramatically in recent years thanks to an active campaign by animal lovers.

It has always been the hot potato, never leaving the center of debate for decades at home and abroad.  Dog meat lovers and restaurants claim that eating dog is nothing different from eating beef, pork, or horse meat. They also insist the deep-rooted tradition deserves more attention and respect.

Animal rights activists have called for a complete halt to eating dog meat because the canines are bred in meat farms and slaughtered in a cruel and unhygienic way. Violating an animal protection law could receive a fine of 10 million won (8,968 US dollars) or a one-year prison term but activists want tougher punishment.

The current law prohibits butchering an animal in front of other animals and requires quickest and painless methods in butchering. However, dog meat farms and slaughter yards are not subject to the Sanitary Control of Livestock Products Act, there's not much the government can do.

There has been growing awareness of animal rights, helped by an increasing number of South Korean households with pets. In 2015, a survey showed 22 percent of households were living with pets.