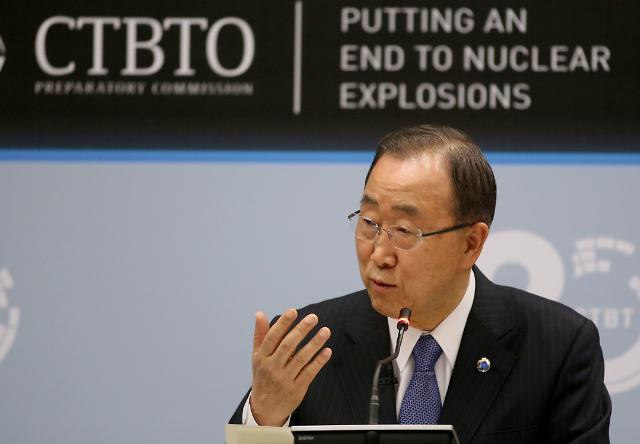 ​
UN Secretary-General Ban Ki-moon called for rejecting politicians who are unconcerned about climate change and make racist remarks, in what could be a swipe at U.S. Republican presidential candidate Donald Trump.

"We are appalled by war crimes in Syria and elsewhere. We are outraged by racism and hatred, especially when voiced by politicians and would-be leaders who have a duty to bring people together, not drive them apart," Ban said during a speech at the Columbia University commencement ceremony.

Ban then called for help in the UN's efforts to tackle climate change.

"Last month marked the seventh month in a row of the hottest global temperatures on record. We have the historic Paris Agreement," he said, referring to December's U.N. climate change agreement aimed at curbing green house gas emissions.

"You can help bring it to life. Don't vote for politicians who deny the problem," he said.

The remarks came a day after Trump said he would seek to renegotiate the Paris agreement, saying he's "not a big fan" of the landmark deal.

"I will be looking at that very, very seriously, and at a minimum I will be renegotiating those agreements, at a minimum. And at a maximum I may do something else," Trump said in an interview with the Reuters.

Trump has also been criticized for making racist remarks, such as portraying Mexican immigrants as rapists.