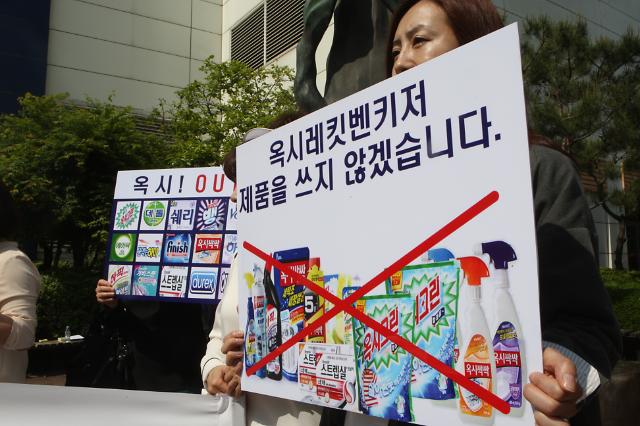 ​
Prosecutors sought a court-issued warrant Wednesday to arrest a former chief and two others from the South Korean unit of a British company on manslaughter charges in an investigation into deadly humidifier disinfectants that triggered a public health scare and a buyer's strike.

Shin Hyun-woo, 68, had served as CEO of Oxy Reckitt Benckiser Korea in 2011 when health authorities revealed a possible association between the use of humidifier disinfectants and serious lung ailment.

He and two former members of Oxy's research lab face charges of accidental homicide and professional negligence resulting in injury. They are accused of overlooking the harmfulness of disinfectants.

Two college professors, including Cho Myung-haing of Seoul National University's veterinary department, have been questioned for writing academic papers, assigned by Oxy. They are suspected of tampering with research data in favour of the market leader in disinfectant sales.

Las week Oxy said it would set up a 10 billion won ($8.7 million) fund for the victims for failing to take quick measures over deaths and diseases caused by its humidifier sterilizer. It promised to provide "timely and fair compensation".

The victims have insisted  Oxy's parent company in Britain should be investigated to see if it was  aware of the disinfectant's harmfulness. The Environment Ministry has vowed to find a correlation between the use of toxic disinfectants and other health symptoms in addition to lung-related diseases.