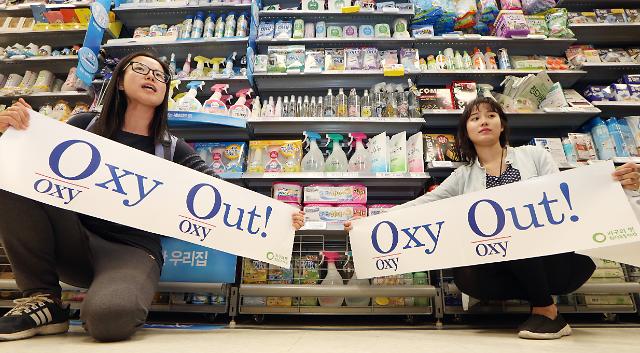 
Prosecutors detained a veterinary school professor Wednesday to see if he covered up the harmfulness of humidifier disinfectants sold by the South Korean unit of a British firm as an influential consumer group called for the nationwide removal of its products from shopping malls and department stores.

The professor identified only by his surname, Cho, was taken into custody for questioning when investigators raided his office at the veterinary department of the prestigious Seoul National University to seize a record of his experiment and other documents.

Cho is suspected of writing one of two academic papers, assigned by Oxy Reckitt Benckiser Korea, that its products were not harmful, refuting a 2011 report by health authorities that revealed a possible association between the use of humidifier disinfectants and serious lung ailment.

Prosecutors have questioned officials from Oxy Reckitt Benckiser, the market leader in disinfectant sales in South Korea, to see if the company covered up the toxicity of disinfectants.

Government statistics showed 103 people, including dozens of pregnant women and infants, were presumed to have died after using humidifier disinfectants produced by Oxy and other companies. Consumer groups have accused them of falsely advertising their clear liquid disinfectants as safe.

The professor's detention coincided with a statement issued by the Korea National Council of Consumer Organizations urging domestic online and offline shopping malls and department stores to stop selling all Oxy products.

On Monday Oxy head Ata Safdar promised to set up a 10 billion won ($8.7 million) fund for the victims, saying his company accepts "responsibility" for failing to take quick measures over deaths and diseases caused by its humidifier sterilizer. He said his company would provide "timely and fair compensation".

In courts, Oxy and distributors are involved in a series of suits with those suffering from lung damage. There was a wide gap in the total number of the victims because the victims failed to present any clear evidence supporting a direct causal relationship with the humidifier sterilizer including chemicals such as poly hexamethylene guanidine.

The victims have insisted the investigation should focus on whether Oxy and its parent company in Britain were aware of the disinfectant's harmfulness in advance. There have been unconfirmed allegations that Oxy skipped a safety test despite a warning from experts.

The Environment Ministry has vowed to find a correlation between the use of toxic disinfectant and other health symptoms in addition to lung-related diseases.